What I wear, when I wear it, and how it works on my bike

The snow was just a dusting, but it’s pretty cold outside. We had no plans and so I unpicked, pinned and re-sewed the shoulder seams on the vexing grey dress. 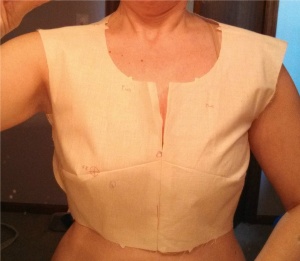 The dart does not run all the way to the center seam–that’s a pressing line. The dart ends at the red circle, as it is supposed to.

Then I stitched up a muslin for the Very Easy Vogue 8764. It is, in fact, very easy. Cutting and piecing the bodice took hardly any time at all. Working off my recent frustrations, I cut a much smaller size in the bodice than the pattern measurements would suggest and graded up through the skirt to the hips. In ready to wear, I usually buy two sizes smaller in tops than bottoms, so that makes sense. I’m not sure how to gauge success. The bodice certainly feels much better fitted than  both the 8630 and the 8945, but the center bust mark is above and toward the armpit, away from my actual center bust. If I tried it on in a department store, I would figure it fit and buy it if I liked it. But since I know that the dart does not sit where it should, I’m not ready to stitch it up in the plum linen I bought for the pattern. 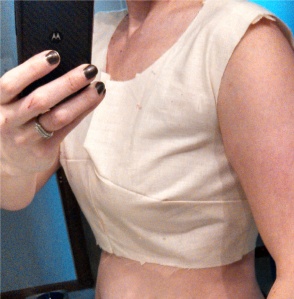 As always, unfortunately, I don’t know how to fix it. Is the issue the bust dart height? Or is it the length of the dart? Should I have chosen a different cup size from the pattern choices? Maybe I will try that first–it might be pulling a bit at the underarm, so maybe it’s just the wrong size. Because I did not cut and sew the skirt, I don’t know whether the waist is sitting at the right point, but it certainly looks like the bodice, by itself, is sitting at the narrowest part of my torso.

I did not quite feel motivated to try another muslin or moving the dart, but I think next weekend I’ll make some progress with it.

Edited to add: So really, it seems that just choosing the next larger cup size pattern piece will fix the issue. I transferred my bust marking to the the traced pattern piece which I used to cut the muslin, then aligned it with the other pattern piece, and lo! the bust points matched. I probably won’t do anything further on the dress until next weekend, but it seems that FBA is at least part of what’s been creating my fit issues. I’d love to try the Cloister again (as just a top) with an FBA, just as soon as I find some tutorials on doing that without darts.

Wouldn’t it be nice if this were some sort of meaningful turning point in the quality of my sewing?